Ulduar 25man: Hard modes
Posted by Electronicus - June 18th,2009 at 2:55pm
Progress in Ulduar has been good with normal modes generally being one-shotted allowing us to spend time on various hard modes while still having plenty of time to clear the instance (other than Algalon) before the reset. Completing the keepers on hard mode will of course eventually allow us to face Algalon, but we are not quite there yet.

Initially we spent some time working on Thorim's hard mode and came close several times while learning but having decided to move on last week and wanted to gauge how quickly we could kill Hodir without particularly going for the hard mode kill. We were slow by 18.1 seconds.

Having seen that the following week we decided there was no way we couldn't improve that and inevitably we killed Hodir in about 2 minutes and 59 seconds to achieve Heroic: I Could Say That This Cache Was Rare. Not our best attempt, but it can only improve.

So we moved back to Thorim and had some very strong attempts with less avoidable deaths than usual (excluding me!). The difference between doing this fight normally and hard mode is the presence of Sif which boosts Thorims health and increases raid damage significantly. Positioning and composition are very important but ultimately we got Heroic: Lose Your Illusion and some paladin shield.

It wasn't really a priority for us, but during last week's raids, Flame Leviathan was hit by the nerf hammer in a rather large way. Last week we had no trouble killing Flame Leviathan with three towers, so after this nerf it wasn't going to be completely unfeasible that we could do four towers. It is certainly a fun fight which is a shame as generally if one person in a particular vehicle makes a mistake early on, then it will cost you. But we got Heroic: Orbit-uary, one more for the meta and a bit of high level gear.

Next up we will be focusing on Freya having already got Heroic: Knock on Wood which involves one tree still being up, we are going to take a look at two and actually...
Ulduar 25man: Yogg-Saron
Posted by Electronicus - May 12th,2009 at 8:43pm
I guess C'Thun 2.0 is more of an octopus than a slug, either way he has left a mess as all creatures with teeth for eyes do. I believe the kill was a horde first on Arathor and certainly well deserved. Here is the obligatory kill shot.

​
So there we have it, what could be our last new boss kill for a few weeks until we endeavour to complete the four keeper hard modes and unlock Algalon. We spent quite some time carefully working through the various stages of this fight and I shall cover these after posting the full fight from Youtube.


[youtube]7kUlf84lRe4[/youtube]​
The first phase involves having the entire raid carefully rotating with a cloud and killing Guardians of Yogg-Saron on top of Sarah, unless we do it the other way. The kill actually shows our most hectic first phase that we experienced throughout our build up to the kill. At one point it looks so unmanageable that a wipe was called (hence my sharp exit to the door). But in true Maligned style we let slip the cows of war and let Yogg sort them out.

Phase two involves killing various tentacles, preventing insanity and having the melee run off to fight other tentacles disguised as historical figures as fast as possible thus stunning the brain of Yogg-Saron. The guides recommend that this should take four cycles, although we have been consistently doing it in three.

Phase three involves nuking a 30% Yogg-Saron while killing immortal guardians and turning away from the boss to prevent insanity. We reached phase three several times in a better state than this, but I guess practice makes perfect and everyone knew what their jobs were.

The fight is now complete in its easiest mode and I have no doubts it will get bloody hard without any or all of the surrounding guardians helping us.

This week we were obviously pushing to get Yogg-Saron down so skipped the optional bosses where convenient so on our way to the exit we also...
Ulduar 25man: General Vezax
Posted by Electronicus - May 3rd,2009 at 9:23pm
General Vezax is the twelfth boss encounter in Ulduar. He can be found in the Descent into Madness guarding the Prison of Yogg-Saron. Mana-based classes will have to deal with a lock on their regen, but will be able to restore it by destroying crystals that will drop a residue on the floor to restore it. Ater some attempts on Thursday night, we were able to finish him with twenty five men (and women) left standing on Sunday. 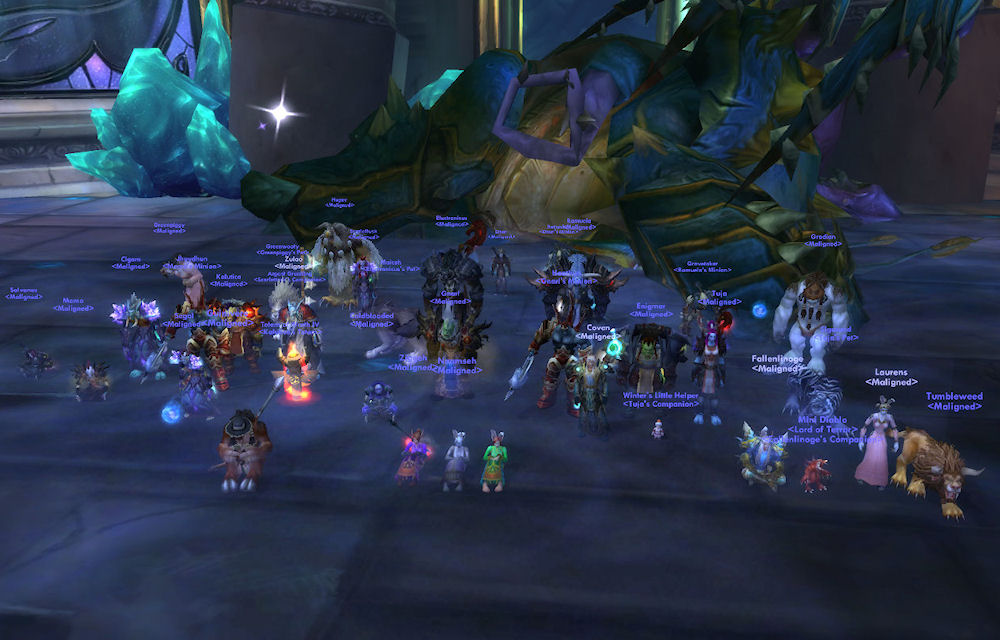 ​
An interesting fight after some truly appauling trash. After we worked out a few issues we had no problems finishing the job on what really just ends up being a rinse and repeat fight. Clouds are the only way in which you can get mana back at the cost of taking damage - unless you are a hunter: /gloat.


[youtube]5Cjh4R-6jzw[/youtube]​
I am still experimenting with the format of the videos so I expect as more time passes I will be able to make improvements, but if you want to check it out in fullscreen, click through here and watch it in HD. The video doesn't really show me doing what you would expect for a DPS class in that fight as I am pretty much standing 20 yards away from Enigmar - the main tank, throughout the fight in order for him to intervene and escape when needed. The video is in double time, which actually means I am doing twice the dps doesn't it?
Page 20 of 25