Ulduar 25man: Mimiron
Posted by Electronicus - April 27th,2009 at 2:12am
After a very fast first raid week where fights were generally won once working tactics were established we finally reached the fights where we know exactly what had to be done, but the execution had to be carried out perfectly. Needless to say, after an extraordinary amount of focus from Maligned’s raiders everything came together and we finally slapped the gnome down. 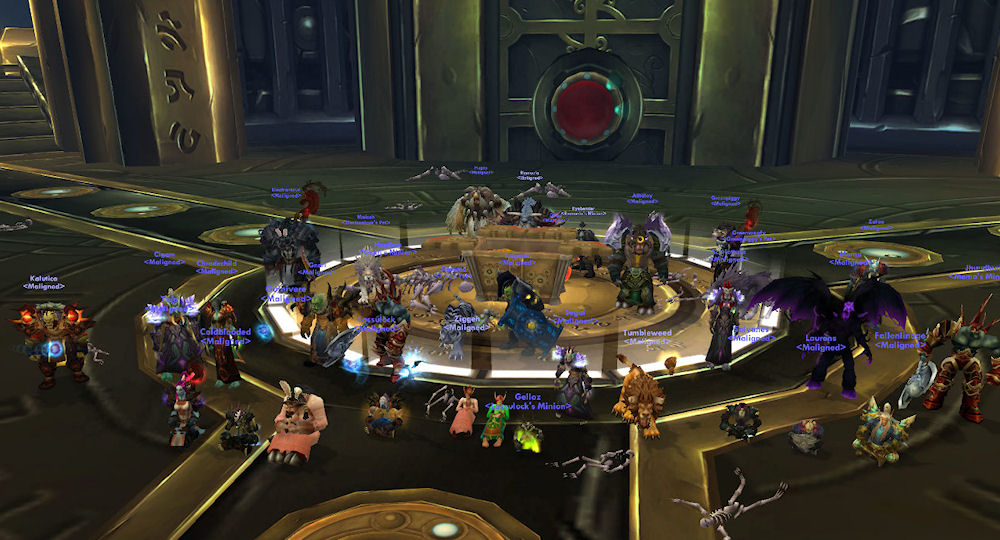 ​
The fight is broken down into four phases that all need to be dealt with differently with all raiders having to react to various boss abilities. This fight does seem to have a little bit of everything going on: mines on the ground, an explosion around the boss, an eye beam of sorted that must be avoided, hunter kiting, warlock tanking, missile strikes (I am guilty of failing to dodge more than once!). Generally a bucket load of raid and tank damage.

The final phase is utter chaos with the majority of the abilities from the previous phases all being used against us and to top it all off, the components that made up the former phases all need to be killed within ten seconds of each other. I shudder to think what will happen once we press the inviting red button at the start of the fight – we will do it eventually I am sure, accidentally or otherwise.
Ulduar 25man: The end of the first week
Posted by Electronicus - April 22nd,2009 at 12:53am
The first week of raids into Ulduar 25 man has now ended and progress has been good. In four nights we have managed to clear eight new bosses on previous nights and then a further two tonight. It certainly beats the monthly progress we were making in Sunwell!

Firstly we made our way to Thorim and after several attempts - each making a little progress in each of the two required groups - we got him down. Cue obligatory non-kill shot as another boss disappears having vowed to help us later on.

​
As you enter the arena, an alliance team are in a neverending battle with a jormungar, so we valiently jump in and kill the worm - only then realising our place we then quickly dispatch the allies and this is where the fun starts. The raid splits into two groups the first running a gauntlet to kill two mini-bosses (whose abilities elude me as I wasn't part of that group) in order to force Thorim to join in the festivities. Meanwhile the other group has to take on endless waves of angry mobs until the boss is ready dodging huge hammers and lightning charged poles. Very hectic indeed. Once thats done the boss is generally tank and spank with what I believe were tank debuffs - but meh, I am a hunter and shoot things.

Rather than progress into Mimiron trash, which apparently takes some time, we pulled back to Ignis and upon killing him we ensured that we had been able to take down all optional bosses available up to our progress level.

​
Having nailed the tactic last night on the ten man version, we knew exactly what we had to do and we did it. The boss is tanked while various golems are dealt with inside a scorched earth by off tanks. Once these golems are molten they are fed to water and obliterated by mages. Meanwhile the DPS are laying into the boss. The boss will ocassionally throw a raid member into a slag pot around his waste and cast...
Ulduar 25 man: The third raid
Posted by Electronicus - April 19th,2009 at 11:51pm
As promised, here is a report on what Maligned got up to this evening. We returned to Kologarn and after a practice attempt we finished the fight in a manner that can only be described as something I am not going to share here. Needless to say, a kill is a kill and we will take it. 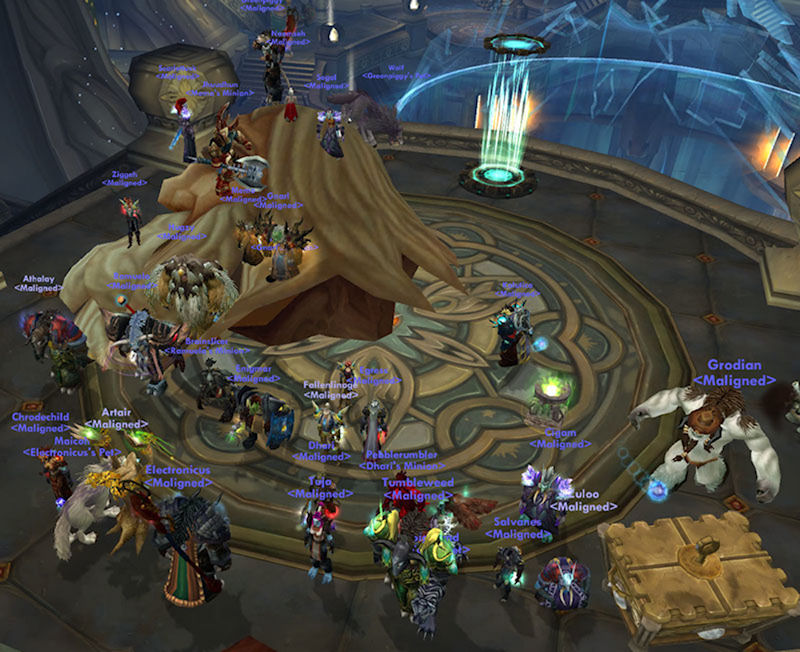 ​
Basically the boss is tanked and the majority of DPS takes on his right arm and dodges (with varying degress of success) his eye beams. Once the arm is down some nasty little bastards called Rubble are tanked and destroyed. Rinse, repeat and then create a bridge into the next area.

And then just around the corner we meet Auriaya, an optional boss but to be honest she was in our way and had to be shown her place. 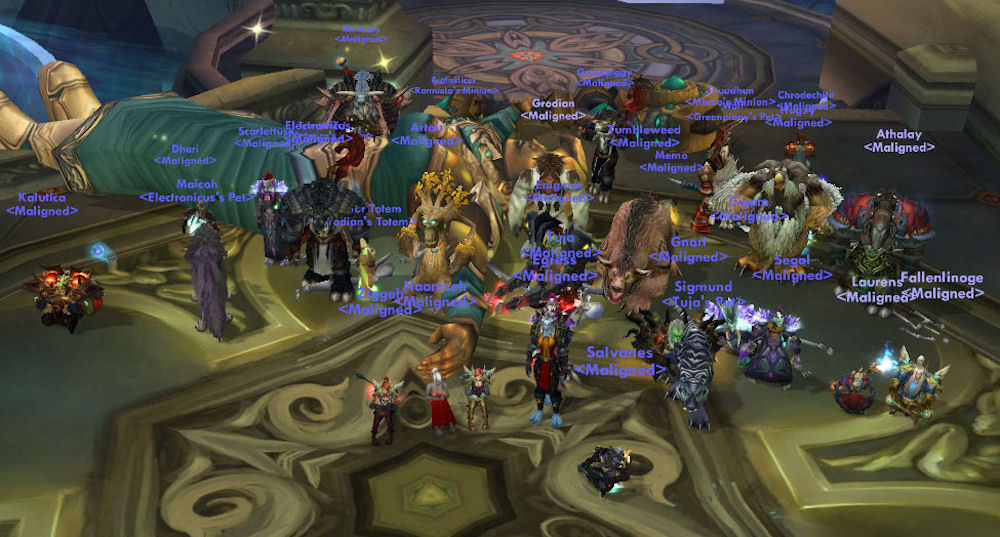 ​
The fight is all about the pull and then restraining the DPS. The latter was the biggest problem, but once we had that under control we were able to finish the fight quite easily. Next week we are going to practice putting the void zones in a place where everyone can get to stand in them and take lots of damage as we feel it is totally unfair that those unfortunate enough to have a tremor totem didn't get to experience the fight as it was intended.

We checked out Hodir, ran away scared and entered a wonderful, magical land with trees and evil little flowers, dragons and demons. We took the easy route this week and killed the three sub-bosses. The first involved a unique method of tanking whch we only discovered when half the raid was dead "get aggro and then run away tanking" is new to the scene but we are pretty sure it is going to catch on. Freya herself is an easy boss but she does have friends, but they ultimately didn't provide a challenge. 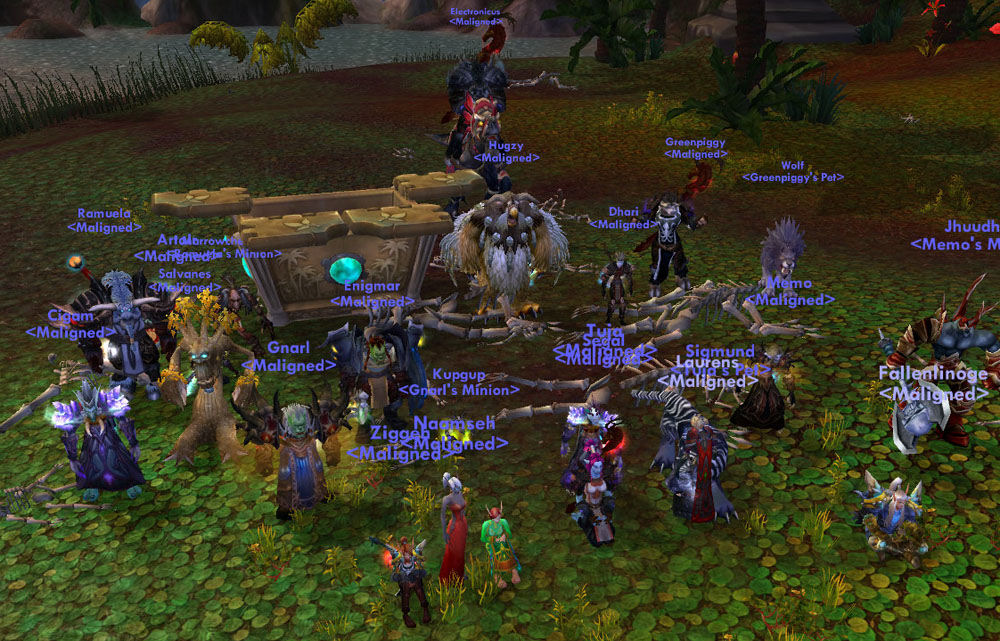 ​
Before the DPS turns to focus on Freya herself, they have to take on six waves with one of three different strains of mobs raning from a big one who...
Page 21 of 25