Ulduar 25 man: The first two raids
Posted by Electronicus - April 17th,2009 at 12:40am
So Ulduar became available this last Wednesday and two scheduled raids have passed, in that time we have managed to kill four bosses, of those two of them are server firsts!

We started slightly behind our usual 7:30pm raid time to give those with jobs some moments to get their Warcraft updated and addons sorted but then we got right down to business. First up was the mini-gauntlet and Flame Leviathon. Sure, the vehicles are fun - briefly - but its good to know that this boss on its easiest of easy modes really does consist of fifteen vehicles battering one vehicle. I am looking forward to trying both different tactics and different vehicles in the coming weeks leading up to the inevitable fucking impossible mode.

Next up was Razorscale and we heard this fight was trivial, so thought we would get it down quick and move on. Rather disgracefully it took us three or four attempts and for that we apologise. We killed this boss pre-nerf - har.

​
I actually really liked the look of the boss, yes it is just a big rusted proto-drake but along with many bosses in Ulduar it looks incredible. The general idea is you protect some dwarf engineers while they repair four harpoons. Once done the boss is dragged down from the sky and you can slap him around until about 50% then it becomes tank and spank while he spanks you back. Oh and there is fire.

Next up we faced XT-002 Deconstructor and while lacking a key piece of knowledge on how to complete the fight easily on Wednesday, on Thursday we came back and quickly finished this boss off.

​
The second mechanical boss in the instance requires DPS on the boss, DPS on some adds as well as the ability to get away from the raid when certain debuffs are on your character - certainly a hard challenge but we worked through it to get the first kill on the server.

After some trash that...
Sartharion (three drakes)
Posted by Electronicus - January 13th,2009 at 11:06pm
So there she stood. Having completed the fourth and final phase of her sex change operation over the winter's veil period, Greenpiggy was once again ready for battle... 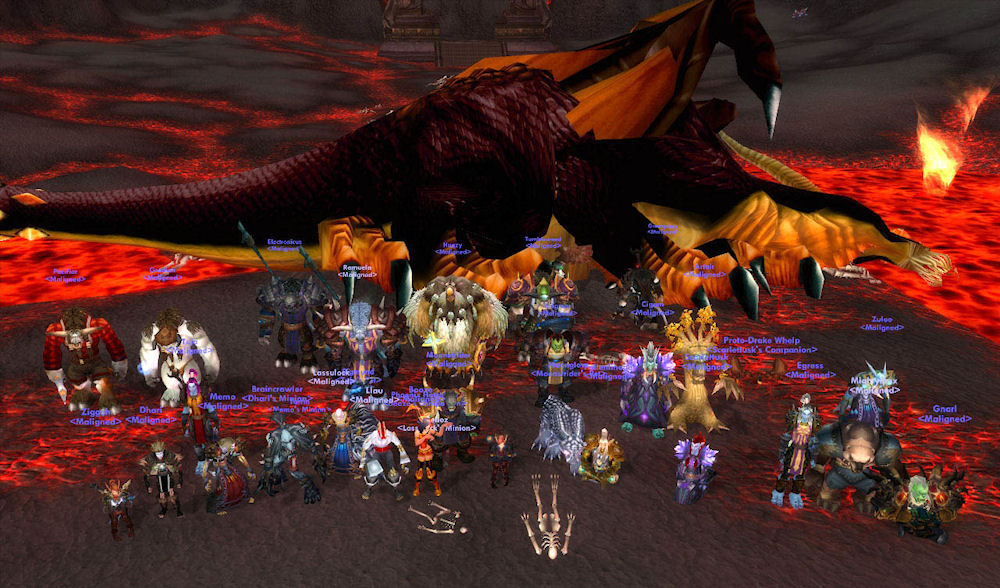 ​
Nope, I can't do this story stuff - where is Zujin when you need him? Same big dragon, two drakes and a third one thrown in for good measure but once again Maligned have conquered what has been the hardest challenge in the game so far. For our trouble we got both an achievement (yay!) as well as the 'Twilight Vanquisher' title.

The fight is even more hectic than the two-drake version although follows the same general rules about not getting insta-gibbed. Our gearing up over the last few weeks has pushed us over the requirements for getting all three drakes down in quick succession before focusing on Sartharion himself as well as ensuring that any tanks don't become overcome by all the damage floating around.

Succeeding in the fight gains no additional gear as such over the fight with two drakes, but has a guaranteed drop of a twilight drake which Zuloo is lovingly modelling for us below. It also demonstrates that the above screenshot wasn't a complete fabication like those damn moon landings. 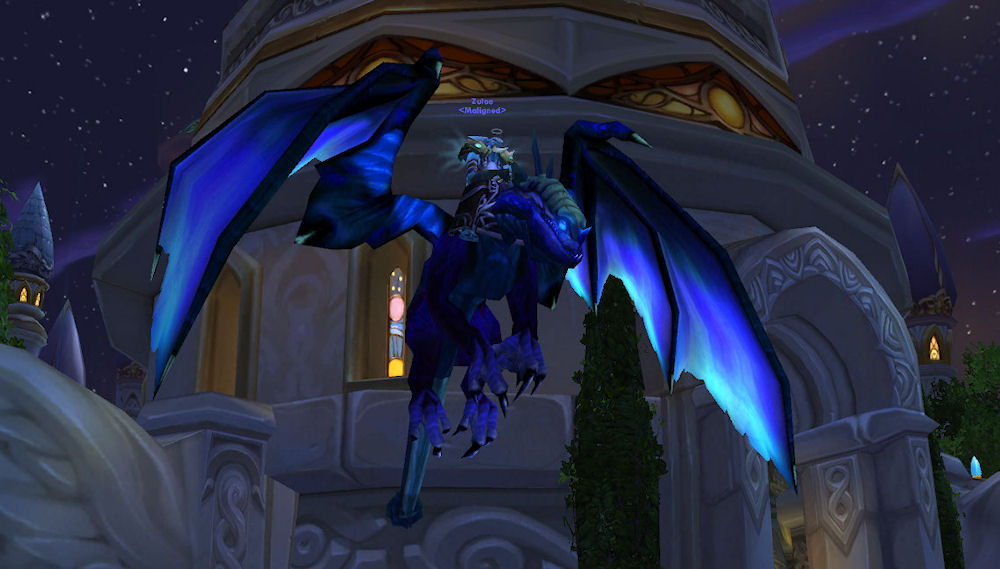 ​
It has been just under three months since we completed the game last time, but here we are again - waiting for the world of Azeroth to plunged into the biggest crisis it has ever seen once more, but until then we shall attempt to catch chickens for gold and earn achivements based on obtaining festive pant suits.
Sartharion (two drakes)
Posted by Electronicus - December 15th,2008 at 3:07am
Eggs it always seems to come down to Eggs when dealing with the Black Dragons, this is mostly due to the fact that after Neltharion’s or should that be Deathwing’s insanity the others hunted down and destroyed them. Now though in the Obsidian Sanctum a new breed of ‘Twilight’ Dragons is being razed by the ebony giants under the watchful gaze of Sartharion and an army of dragonkin.

Strangly enough the entrance to this Sanctum is right at the base of the Wyrmrest temple and not far about it Alexstrasza – the Life Binder and Deathwings most bitter enemy stands, why she does not take action is anyone’s guess, but hey that’s dragons for you. So once again it falls to the well equipped, highly motivated and experience mercenaries of both the Horde and Alliance to deal with this potential threat, which is probably for the best anyway.

The question that must now be asked however is how many ways are there to kill a dragon. 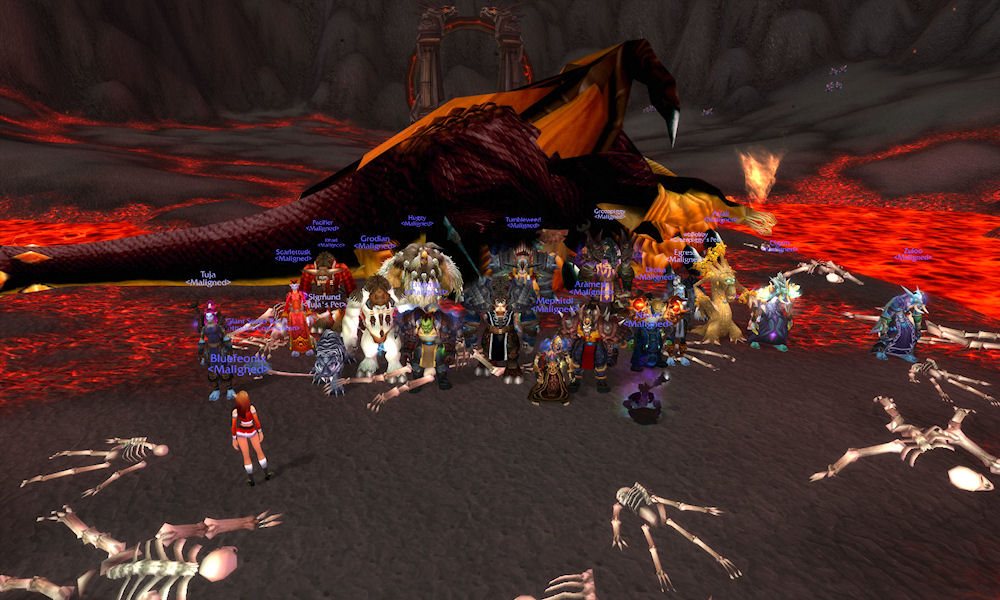 ​
This part of the Obsidian Sanctum contains 4 mobs of interest. These are Sartharion (the raid boss himself) and 3 drakes, Vesperon, Shadron and Tenebron. Each has their own form of adds depending on how you engage. The drake mobs are known as 'Disciple of ...' respectively.

Not much lore I am afraid, if you need a fix, go read up on the The Lich King or something.

Having killed Sartharion with no drakes remaining and seeing how completely easy it was to avoid Flame Tsunamis, we decided to skip starting the fight with a single drake up and moved right to the pair and this makes the fight complicated in several ways.

We did it in such a fashion that we only really worried about one dragon at a time, but the alertness of the raid must increase with the increased debuffs, void zones and having to portal to the twilight zone (no really) in order to kill eggs or disciples. As you can see from the skeletons in the screenshot it was no...
Page 22 of 25