M'uru and Entropius
Posted by Electronicus - October 16th,2008 at 12:00pm
The room was deathly silent; no one had made a sound apart from breathing for the last twenty minutes. They had been at this now for hours and the strain was beginning to show on some but every one knew that there was still a long way to go before they could go home. Finally their leader rose from where he was sitting and spoke, with an expression of grim determination etched on his face as he walked over and looked out the window of the boardroom.

“People this has gone on long enough, in case some of you have forgotten the planning the penultimate fight for the Sun Well Plateau, our most challenging raid dungeon to date,” he declared and spun to look at his development team. “Now what have you got?” The room once more fell into silence as they all looked at each other, then one developer slammed his had on the desk and leapt to his feet.

“I’ve got it,” he declared excitedly, all eyes turn to him. “We’ll make it a two phase fight, in the first one Mu’ru spawns lots of adds and in the second turns in to a giant void walker,” there were cheers and claps from every one in the room but the boss who shook his head.

“You suggested that for High Astromancer Solarian in ‘The Eye’,” he pointed out as he moved back to his seat and once again the room was filled with an oppressive stillness, but only for a second as another developer stood up with a grin on his face.

“What if in the first phase when one of the adds die, it spawns more adds,” he suggested. All eyes turned from him back to their department head who sat for a moment letting the idea sink into his head then he smiled.

“Works for me,” he decided. “Now lets go for a beer,” the developers cheered once and rushed from the room.

​
We were already making good progress into phase 2 on this fight before the big Wrath patch hit - of course anyone could say that, but killing him/her/it the first night possible (Felmyst bugged the previous...
Eredar Twins
Posted by Enigmar - September 26th,2008 at 11:46pm
Twins, everybody loves them. Two beings that are identical to each other and whose minds are like one, well that’s the theory anyway. It just so happened to hold true for the Eredar Twins - Lady Sacrolash and her sister The Grand Warlock Alythess, together they were a formidable force and truly Kil’Jaeden The Deceiver had chosen well in placing them as the guardians to the entrance to his inner sanctum where they could watch over the weak and treacherous Fel-Elves.

They had heard the death cry of Sathrovarr the Corruptor and a short time later the ground shook as Brutallus the largest Pit Lord the legion had ever know fell. They felt as his demonic essence corrupted the body of one the noble blue dragons and twist it into a villainous servant of their lord, however neither of them were surprised when it too fell before the force that now assaulted the Plateau.

Yelling orders they sent the Fel-Elves into action knowing full well that they could not stop such a force but with their pathetic disposable lives they would buy the summoning ceremony time. True to their expectations, their minions lasted less than a hour, now these determined and powerful enemies stood on the platform above them looking at each other both Sacrolash and Alythess swore they would go no further this is where the line would be drawn and held. 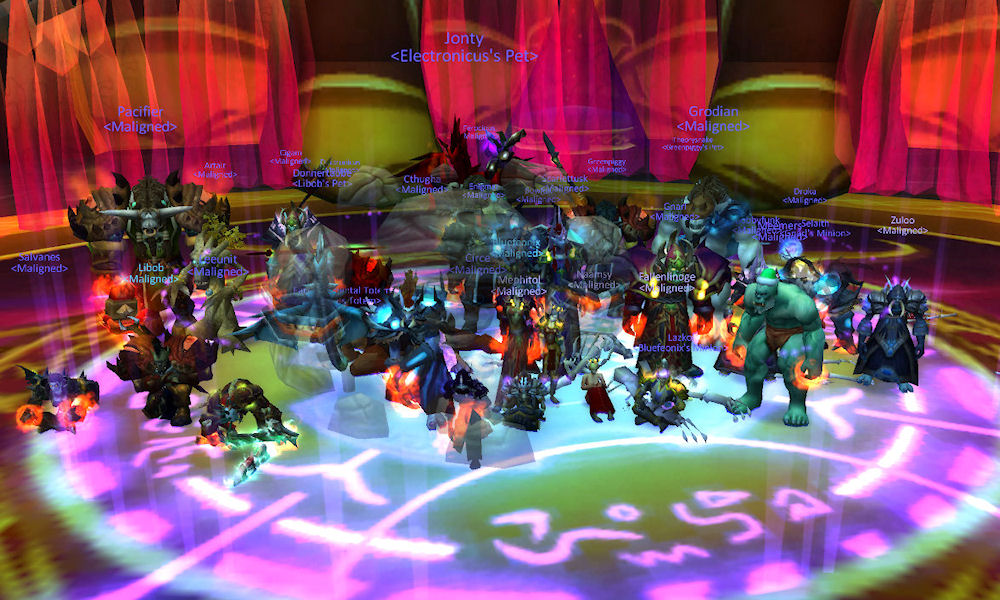 ​
Having spent just under two weeks slapping these two fine ladies around, we realised they weren't really as commited to the relationship as we thought and we were forced to move on.

The general tactic for the fight is to have a spasm with your mouse hand when you hear your name called over Teamspeak and move away from everyone else, conveniently located on top of each other. Eventually if this is repeated enough you get to jump down into the centre, a treat often ruined...
Felmyst
Posted by Enigmar - September 26th,2008 at 11:46pm
Their skeletal talons passed inched over his head as Fallenlinoge rolled under their attacks, no sooner was he back on his feet than they were striking at him again. This time he used his shield to protect himself from the hail of blows that they launched against him. A quick glance over his shoulder told him that his allies were now pulling the other undead that their foe had spawned into one location so with a powerful push he knocked the monster assailing him and ran toward the growing group.

As the reached the spot the ground beneath his feet had been sanctified by another of his order and instantly the undead switched their focus to this new threat. Making a quick exit he found himself standing next to Gnarl one of his oldest friends who was in the middle of hurling seed of shadow energy at the skeletons, moments later they exploded showering the pair in shards of bones. Form above them there was a roar of anger that echoed off the high walls.

“All Right here she comes again!” Greenpiggy yelled. “Everyone, get back to your positions.”

“It going to take me hours to get my hair cleaned,” Fallenlinoge complain to his friend. “Oh and look what they did to my shield I just got it polished.”

“Ah shut up pretty boy,” Gnarl laughed punching him in the shoulder. “Better get to you spot,” he added pointing at the descending undead dragon. “We are not done here.” 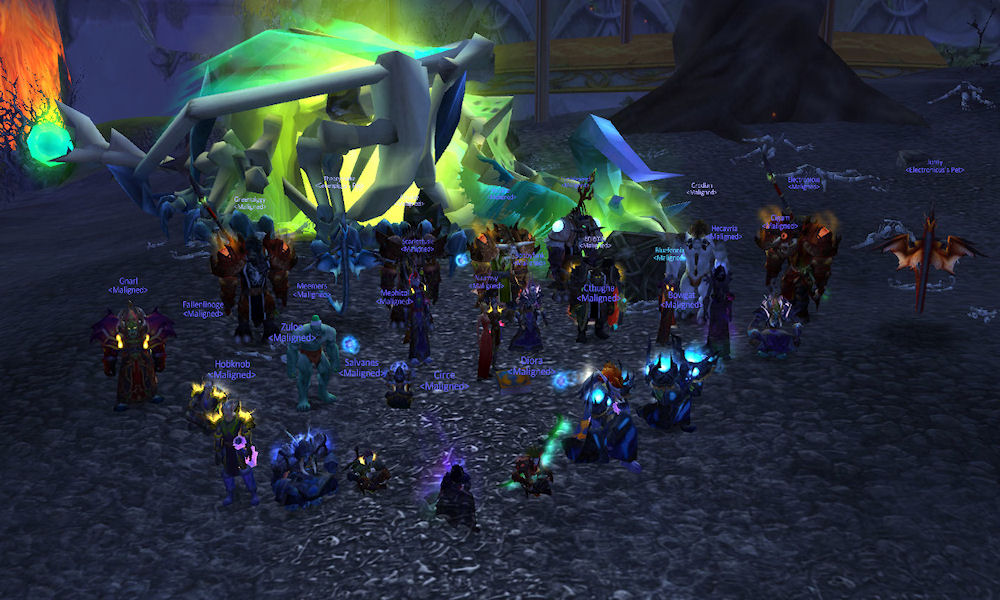 ​
Some bosses really make every effort to make life hard, Felmyst is one of them. To start with, she hits like she means it, randomly attacks players, makes everyone run around and then has the nerve to take off and start breathing all over the place - naturally spawning many skeletons.

This is certainly a fight that demands you be at your keyboard and paying attention or she will punish you and everyone else in the raid. Alas like all the bosses we have faced so far, her fate was...
Page 24 of 25