Madness of Deathwing Heroic
Posted by Electronicus - April 24th,2012 at 8:18pm
Pain... Agony.... My hatred burns through the cavernous deeps. The world heaves with my torment. Its wretched kingdoms quake beneath my rage... But at last... The whole of Azeroth will break... ...And all will burn beneath the shadow of my wings...

Deathwing the Destroyer, formerly known as Neltharion the Earth-Warder, was one of the five Dragon Aspects and leader of the black dragonflight. Thousands of years ago, Neltharion was empowered by the Titans with dominion over the earth and the deep places of Azeroth. However, driven mad by the Old Gods, he turned against the other Aspects during the War of the Ancients. Among both mortals and dragons his name became one whispered with a feeling of fear and contempt.

​
I definately enjoyed this fight more than spine, although we were met with frustration last week as we got to around 3% several times before the hard enrage (the end of the world etc.), we literally needed to buy ourselves two or three seconds - our best phase one and phase two attempts combined would have got us a kill. This week with a few tweaks, a few upgrades as we cleared our way there again and on our third attempt he finally went down. Hopefully it won't be long before we can squeeze this instance down to one night a week and enjoy another imminant Blizzard release.
Spine of Deathwing Heroic
Posted by Latill - March 29th,2012 at 8:29am
The Spine of Deathwing is the first of two confrontations with Deathwing in the Dragon Soul raid. The battle begins on The Skyfire as players leap onto the Destroyer's back, attempting to weaken his armor enough for their allies to attack, and ends when he is defeated and crashes into the Maelstrom. 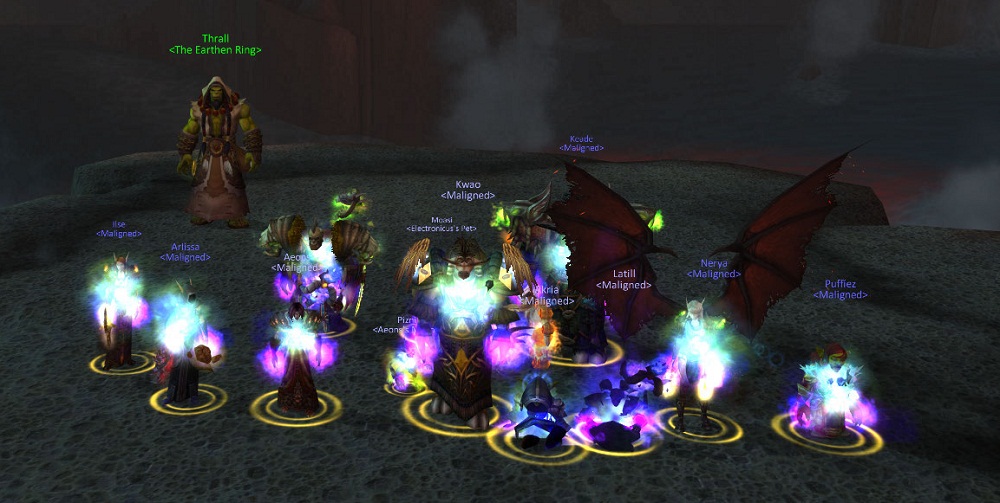 ​
Spine was like a cute little puppy dog when he finally rolled over and died last night. We have our hundred plus attempts on this demanding and at most times frustrating fight but once again it shows practise makes perfect! We didn't have any of the desired tank classes so handling the bloods was challenging, I especially feel sorry for Keade spending four hours per night running in circles on the back of the spine while we progressed. But Druid / Death Knight tank setup can work!

We had some very solid attempts from the start and it paid of at the end of the night to everyones big relief, and of course with some nice rewards to our raiders, well done all, Madness next!
Fangs of the father
Posted by Electronicus - March 21st,2012 at 1:26pm
Your melee attacks have a chance to grant Shadows of the Destroyer, increasing your Agility by 17, stacking up to 50 times. Each application past 30 grants an increasing chance to trigger Fury of the Destroyer. When triggered, this consumes all applications of Shadows of the Destroyer, immediately granting 5 combo points and cause your finishing moves to generate 5 combo points.

​
Congratulations Nerya for obtaining our first pair of legendary daggers, soon he will be able to outdps Kwao.

Certainly with the kills of Warmaster and Hagara, I resisted the urge to point out how easy the 25 man heroic encounters were compared to the 10 man versions. Which really sucks condsidering the loot per person is higher, you get more volor points (up until the stupidly low cap). (let alone the fact you likely have all debuff and buff slots covered, more than one res as well as the luxery of knowing that one death on a 25 man encounter likely isn't enough to fail an encounter). Each week we have one chance for one kind of tier token to drop compared to three, or a boss dropping shared loot rather than something from their own loot table. With regards to the legendary compared to Conviction a 25 man guild on Arathor with similar progression.

Hopefully Mists of Pandaria will address this, although for the future of 10 man guilds I hope 25 and 10 man instances continue to share a lockout.
Or else I will literally do nothing about it in protest.
Page 4 of 25