Warmaster Blackhorn Heroic
Posted by Latill - March 9th,2012 at 10:32am
Though once vast in number, only a few dozen twilight dragons now remain. Astride these hardened survivors are the last vestiges of the Twilight's Hammer's army: the elite drake riders of Deathwing's personal escort. Led by the insidious Warmaster Blackhorn, they move with unholy purpose, driven to protect their dark master.

​
Btw this be dead, our slacker hunter haven't updated with the pretty screenie yet but will be inc.
Slacker hunter edited and is now patiently waiting for text from Latill.
Hagara the Stormbinder Heroic
Posted by Electronicus - February 16th,2012 at 12:20pm
Hagara, one of the first students of arcane magic under the Forsaken, showed surprising potential for one who had started learning so late in life. But in her undisciplined attempts to bind elementals into servitude, she was ensnared and twisted by the Windlord, Al'Akir. Now fiercely loyal to the Twilight's Hammer, Hagara binds others for her elemental masters to torment.

​
After one-shotting the previous three bosses last night in a mad dash to Hagara we wiped. But then we didn't! Someone did get me killed so I will be reviewing the CCTV footage from Nerya to find out who, they will be then brought to justice.

The fight itself is very quick, as they all seem to be, but needs to be done right and unlike the 25 man version (I am told) requires a little more involvement, failing to see any advantages to 10 man raiding to be honest, less room for error etc. but its all good. Next stop Gunship 2.0
Warlord Zon'ozz Heroic
Posted by Electronicus - February 5th,2012 at 10:34pm
Countless ages ago, Warlord Zon'ozz and his soldiers waged endless war against the forces of C'Thun and Yogg-Saron. Millennia have passed, but the warlord still serves the chaotic might of the Old God N'Zoth. Deathwing has now unleashed this legendary faceless one to crush the defenders of Wyrmrest Temple. 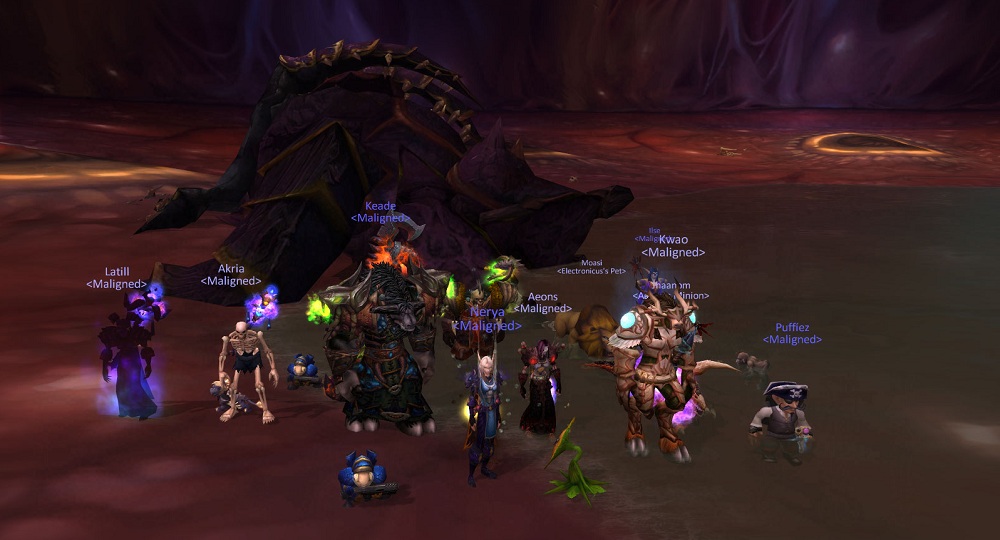 ​
Getting a first kill a week after a five percent nerf of the instance is a bit of dual edges sword (aren't they all?) but doing so with over thirty seconds before the enrage means we made it comfortably. As with most fights we have seen so far its all about excution and tactics and finding out what we can get to work with our composition.

Having a special hatred for world events, it is such a pleaure to see three running at the same time, the goblin commoners don't know what the hell to talk about.
Page 5 of 25